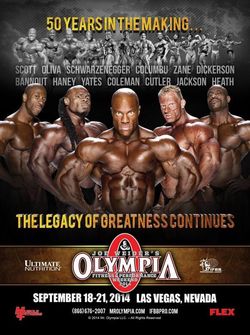 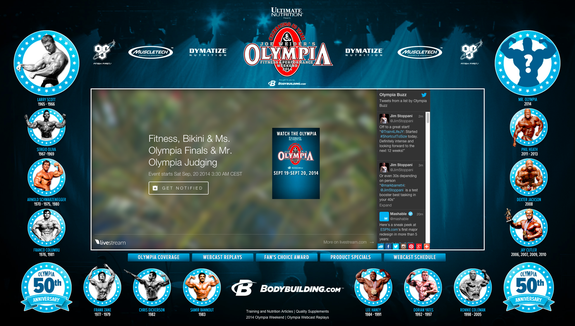 This year marks the historic 50th anniversary of Joe Weider’s Olympia Weekend, and is a must-see event for all fans of physique competition. Thanks to Bodybuilding.com, everyone can tune in—for free! Our live HD webcast, as well as post-event VOD (video-on-demand) replays, will stream in the Bodybuilding.com Webcast Player (available soon), theBodybuilding.com Livestream Channel, the Livestream Roku channel for those watching onbig-screen TVs, and the Livestream mobile app*.

Bodybuilding.com’s live webcast will stream the IFBB pro events on Friday night and Saturday night (September 19th and 20th) from The Orleans Arena in Las Vegas, Nevada, beginning at 6:30 p.m. PDT (9:30 p.m. EDT) both nights. The Friday night webcast segment will feature the Mr. Olympia judging round, and the finals for the beautifully fit women of the Bikini, Fitness, and Ms. Olympia competitions.

The Saturday night webcast segment concludes the pro competitions with the finals for the women’s Figure division, the men’s 212 Showdown, and the main event—the Mr. Olympia finals. Reigning 3-time Mr. Olympia Phil Heath will battle to defend his title against fierce challengers (and champions in their own right) Kai Greene, Dexter Jackson, Branch Warren,Dennis Wolf, Shawn Rhoden, and Victor Martinez—just to name a few!

The webcast also features plenty of expert pre-show discussion and post-show analysis and athlete interviews, and also includes the annual Webcast Fan’s Choice Award, where fans get to vote for their favorite athlete. The presentation of the 2014 Bodybuilding.com Supplement Awards winners will also be viewable via webcast. The annual Supplement Awards continue to set the standard for recognition of the best products and brands in the fitness and supplement industry.

Each live segment kicks off with an insightful pre-show discussion hosted by veteran sports broadcaster Dave Farra (SyFy, Fox Sports, NBC), who will also provide play-by-play coverage of the competition. Farra will be joined by a panel of leading experts includingLarry Pepe (Fox Sports), one of the most trusted voices in bodybuilding.

*Kindle Fire Users may need to download the Android Livestream app from the 1Mobile Market (because it’s not currently offered in the Amazon App Store).