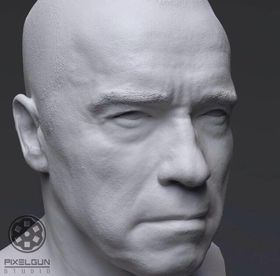 ”I was honoured to join the WWE Hall of Fame earlier this year, and now I’ll continue my WWE legacy with one of my biggest film roles immortalized in WWE 2K16. Match the Terminator against Stone Cold Steve Austin, Seth Rollins or Daniel Bryan, and there’s only one possible outcome: Hasta la vista, baby!”

NEW YORK, Jul 27, 2015 (BUSINESS WIRE) — 2K today announced the debut of 2015 WWE Hall of Fame inductee and global action film icon Arnold Schwarzenegger in WWE® 2K16, the forthcoming release in the flagship WWE franchise. Best known for his acting, bodybuilding and political endeavors, Schwarzenegger, a longtime WWE fan and WWE Hall of Famer, will expand his relationship with WWE through WWE 2K16 with two playable characters – T-800 from The Terminator and Terminator 2: Judgment Day films. The playable characters will be available for those who pre-order the game at participating retailers for thePlayStation®4 and PlayStation®3 computer entertainment systems, as well as Xbox One and Xbox 360. WWE 2K16 is scheduled for release on October 27, 2015 in North America and October 30, 2015 internationally.

”I’ve achieved many things in my life, but I’ve always said success means staying hungry and pushing the limits,” said Schwarzenegger. ”I was honored to join the WWE Hall of Fame earlier this year, and now I’ll continue my WWE legacy with one of my biggest film roles immortalized in WWE 2K16. Match the Terminator against Stone Cold Steve Austin®, Seth Rollins® or Daniel Bryan®, and there’s only one possible outcome: Hasta la vista, baby!”

From early childhood in his native Austria to today, Schwarzenegger represents the ultimate renaissance man, taking risks and defying odds through career accomplishments in bodybuilding, acting, politics and more. He won his first of four Mr. Universe titles at the age of 20, earned seven Mr. Olympia titles and since 1989 has hosted worldwide fitness expositions through the Arnold Sports Festival. Schwarzenegger is a fixture in numerous blockbuster action films, including Conan the Barbarian,The Terminator, Predator, Total Recall, Terminator 2: Judgment Day, TheExpendables franchise and his most recent release, Terminator Genisys, as well as for his roles in pop-culture favorites Kindergarten Cop and Twins. In addition, Schwarzenegger transcended from Hollywood to the state capitol, serving two consecutive terms as the 38th Governor of California from 2003 to 2010.

”Arnold Schwarzenegger is a living legend with universal appeal, a perseverance for greatness and a strong relationship with WWE, including his recent Hall of Fame induction, all of which make him an incredible fit for WWE 2K16,” said Chris Snyder, Vice President of Marketing at 2K. ”He’s a force to be reckoned with and defines what it means to raise some hell. Through his WWE 2K16 pre-order inclusion, fans simply can’t beat the opportunity to play as the Terminator in a WWE ring.”

WWE, a publicly traded company WWE, +2.50% is an integrated media organization and recognized leader in global entertainment. The company consists of a portfolio of businesses that create and deliver original content 52 weeks a year to a global audience. WWE is committed to family friendly entertainment on its television programming, pay-per-view, digital media and publishing platforms. WWE programming reaches more than 650 million homes worldwide in 35 languages. WWE Network, the first-ever 24/7 over-the-top premium network that includes all 12 live pay-per-views, scheduled programming and a massive video-on-demand library, is currently available in more than 170 countries. The company is headquartered in Stamford, Conn., with offices in New York, Los Angeles, London, Mexico City, Mumbai, Shanghai, Singapore, Dubai, Munich and Tokyo.

Additional information on WWE WWE, +2.50% can be found at wwe.com and corporate.wwe.com. For information on our global activities, go to http://www.wwe.com/worldwide/.